‘What is Speyside?’ I asked George Grant at the recent DramFest. He gave me a slightly old-fashioned look. ‘I don’t know,’ he said. ‘We don’t call ourselves that. Never have. It’s a new term.’ That’s the sort of perspective that six (or more) generations gives. Glenfarclas, Macallan and others still prefer to call themselves Highland rather than Speyside on their labels.

George is, of course, right. He usually is. ‘Speyside’ is a modern construct. Prior to the term’s arrival, whiskies from the area would have been known as ‘Strathspey’ or maybe ‘North Country’. Before that, the shorthand for the area was ‘Glenlivet’, a moniker which ended up in a court case.

These days however, its boundaries have been drawn, which makes things easier. According to the Scotch Whisky regulations ‘Speyside’ comprises of:

‘the wards of Buckie, Elgin City North, Elgin City South, Fochabers Lhanbryde, Forres, Heldon and Laich, Keith and Cullen and Speyside Glenlivet of the Moray Council as those wards are constituted in the Moray (Electoral Arrangements) Order 2006(b);

and the Badenoch and Strathspey ward of the Highland Council as that ward is constituted in the Highland (Electoral Arrangements) Order 2006(c).

Long-winded though it is, at least we can say what is – and isn’t – a Speyside whisky. Unless of course you are of the mindset which finds it weird that a geographical region is defined by political boundaries rather than natural features such as.. say .. the Spey watershed. Do that, and a different picture appears.

This is undoubtedly more accurate approach, but it would remove the whisky towns of Elgin, Forres, and Keith from the definition. Cue anguished cries from some quarters.

There is another problematic issue. Today’s tasting shows how this concept of a single Speyside style is as slippery as one of the river’s salmon. If there isn’t even a single Dufftown style, then how can you say there is one which stretches across the region, no matter how you define it?

If regionality doesn’t define terroir in the same way as wine, then maybe it’s time that the concept be quietly laid to rest. Alternatively, you could find new ways that don’t look at political regions, but bioregions which celebrate diversity rather than singularity. There’s more on this idea here.

There is more to the Spey’s 3,000 km2 catchment and 36,500 km of rivers and tributaries than whisky. It’s home to Atlantic salmon, otters, freshwater pearl mussels and sea lamprey (*).

Two thirds of the catchment lies inside the boundary of the Cairngorms National Park, there’s wetlands and moors, hydro power, forestry, agriculture, baking, weaving, and food before you even get to fishing (which generates £15m per annum) and whisky with its ancillary industries: transport, coppersmithing, coopering. It’s a complex web.

What has that to do with whisky? Everything. It is this very diversity which has helped create the multiplicity of flavours we enjoy today. That is what its to be celebrated, not some monochrome notion of what a ‘Speyside’ whisky is. There is no such thing.

Provenance, heritage, and place are vital elements within each distillery’s story and yet how many distilleries look deeply at the very things which anchor them to this place? 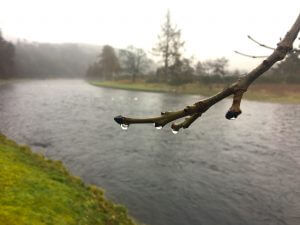 The deeper story of the region is about the river and the landscape, what made people settle there, how conditions dictated what could be grown where, why whisky became a specialisation, how location impinged on flavour due to railways. Speyside is about the people, their stories, their music, their religions, and dialect and how all of this weaves together with place to create this rich diversity which can only exist here.

Rather than having this narrow view of Speyside as a political entity, making uniform whiskies, maybe distillers and drinkers should start to look more closely at how whisky is linked to place, and how that place has influenced flavour and approach over the years. The connections are complex, occasionally fantastical but they are true.

Anyone can put something into a fancy bottle. The real story of each whisky lies in the people and the place. ‘Speyside’ doesn’t exist. Speyside however does.