This is the final account of my whisky roadtrip around China taken last year – before COVID19 hit. Happier days, which shall return. It features memories of Bruce Lee, crab headbands, lion dancing, and issues over language – and a pale whisky. 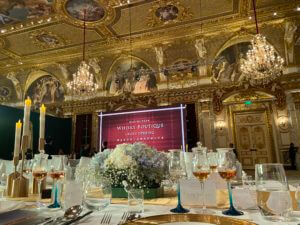 Up at 6 again, the smog already building. Breakfast, then a drive behind endless trucks back to Guangzhou. We’re on a never-ending loop around a megacity.

Lunch is in a grey room with heavy crockery and grumpy staff, not surprisingly as they have to wear crab headbands.

Naturally, there’s no crab on the table. The clams however are fantastic. And the greens.

A robot playing a variant on Pachelbel’s ‘Canon’ drifts past. There’s no point in asking why.

Through back streets and it starts to get interesting once more. Small stores, markets, buckets of pickles, plastic sheeting, and roadside tables. Cigarette smoke and cats, shopping bags and scooters, grandparents and grandchildren, pastries and fried fish. It’s where I want to wander, and smell, and get blissfully lost, but there’s a tasting to deliver. It’s an unusual setting for a great whisky store with an impressively chosen collection, but China always surprises.

It’s easy to slip into autopilot and deliver the same set. But you have to keep it fresh, suss out the audience, get a hint of what they want, what their knowledge is.

I want to talk about location as much as process, get a feel of the reality of a distillery.

‘My country has five million people in it,’ I start. ‘Your city has 13 million. Yet you’ve heard of Scotland. That’s completely mad. Why have you heard of it? Because of this stuff – whisky. Because you like the taste of it. Why does it taste that way? Let’s find out by looking at the country.

Dalwhinnie in the snow. Cry of ptarmigan and wind and mountain hare. Whiteness.I talk of the place, how the chill in the water gives flavour, but wonder how much of this can be translated. Everything has to run to time, so it’s all in shorthand, in the same way as I’m trying to understand this place through car windows and quick conversations.

We can only approximate. Inch towards some mutual understanding. ‘Find your own words,’ I urge them. To only talk about the whisky in my words, in Scottish terminology is a  cop out, a dereliction of duty. What is ptarmigan in Mandarin anyway?

If this is to work, we have to start again. Get to the marrow, make it relevant, create a new language.

A conversation at dinner.

‘My name is Saffron. How do you spell my name?’

Back to the van and on the road again. Headphones on. Plug in Eliane Radigue. Slow throb, as the mind shifts into new space, monks chanting, horns. Through a yellow tunnel to a city with lit up trees and a hotel that looks like a furniture showroom designed by Mussolini.

I mean, Foshan! Home of Wing Chun kung fu, birthplace of Ip Man and spiritual home of Bruce Lee. Memories of trekking across Glasgow to find a cinema that would let in kids to see 18 certificate movies. There’s a Bruce Lee memorial park here now, but that ancient city has long gone. There seems little sentimentality for the old. Wipe away the past, progress.

The afternoon is spent in Mr Hu’s liquor store with a mass of bottles to sign and then a class in the upstairs room. Like many of the new whisky lovers, Hu’s only been collecting for four years, but the collection is impeccable. Lean back on the table and yarn. The fingerprint approach seems to be working.

On the way to the dinner, I notice the full moon’s a strange orange colour.

It’s actually the tint on the window, but the ease with which we agreed it was the smog was chilling. I’m carrying China in my lungs.

That night’s banquet was with most of the cherry and now well-oiled gang from the afternoon session and the same whiskies, so spin the talk away from distillery and casks, to five flavour blocks and how they manifest themselves in different ways.

Knots of people move round the tables, eddies and and currents of chat and association, caught in a whirlpool, then released. The night flows. Clink, clink. No-one challenges me to a fight. Foshan’s different to Ip Man’s day clearly.

Next day. Last day. 300 bottles to sign, then a new boutique opening, compete with lion dancing. Their eyes are painted, they’re fed celery which is then put on the till, then allowed to roam around the store. Amazingly, nothing is broken. Lions in a Chinese whisky shop are more considerate than bulls in British china one.

There’s one last tasting of the Special Releases. History, links, blends, flavour, texture. It ends with Lagavulin 12 year old. I start to talk about location, and heritage and how the whisky tastes like jumping off the pier into the water. ‘Don’t forget that this is an actual place. A magical one. Even if you haven’t been there, try to imagine it.’ I look at the screen where Lagavulin Bay glimmers. My eyes are strangely dusty. Suddenly I’m a long way from home.

That evening I have three minutes to talk about one whisky. With translation that means 90 seconds. ‘Do this one differently,’ says Sam. ‘There’s people saying it isn’t real whisky, it’s too pale.’ It is. A classic 34 year old refill. Not the usual hue for success in China.

I talk about personality. ‘Single casks are like individual people. If you want to find out who someone is, look into their eyes, not their clothes. To understand them you have to get into a conversation, but some are shy, some are confident. They all have something to say though. This is shy, it relies on you making the first move. And the second. Then it starts to open up.’

It’s hard to tell how this more, er, philosophical take is going down. I plough on. There’s polite applause.

Then, suddenly, it’s over. Sitting there at 4.30am, case packed. Along the corridor, check out, stand in the dark cold morning. Now what?

When I come to, we’re over Western Jutland, the familiar dunes, marginal land bound by grass and heather root. There’s a cold front moving in from Britain towards Europe. 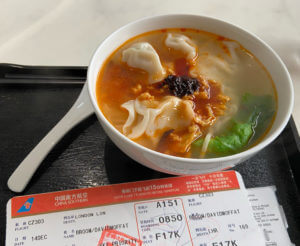