They arrived within days of each other. New whiskies, breaking new ground. Two different styles, one a rye, the other a single malt. Both pioneering, and challenging the narrative – what is single malt, what is American single malt? What is rye whiskey or, to be precise, what was rye whiskey? What could it be?

At the turn of the 20th century rye was American whiskey, but it dwindled and almost died, the result of palates changing and specialist distilleries closing, as the impact of Prohibition, economic depression, and war devastated the industry.

This raises an interesting question. American whiskey didn’t just lose distilleries, it lost ways of making whiskey. It lost knowledge, techniques, and flavours. The question for today’s American distiller is how much of this lost information might be useful in creating a new industry?

Take rye. When its revival started, it was made primarily by Bourbon producers in a way which (to be somewhat simplistic) applied their existing distilling techniques to this different style. What though if those old ryes were nothing like that?

THE LOST WORLD OF RYE

That was a starting point for Todd Leopold. For those of you unfamiliar with the Leopold Bros., story, Todd and his brother, Scott, started their business (appropriately enough called Leopold Bros.) in 1999 when they opened a brewery, and then distillery in Ann Arbor, MI. In 2008, they upped sticks and relocated to Colorado.

Todd is one of the most respected distillers in the US and a leading light in embracing sustainable practises. He’s a big man who thinks big, and it was this questing spirit which led him to the three chamber still.

If you haven’t heard of one don’t beat yourself up. Very few people have. Yet the three chamber still was what was used to make pretty much all the rye whiskey in America pre-Prohibition.

He came across it when reading the report by CA Crampton and LM Tolman which appeared in 1907. The authors had been commissioned by the IRS in 1898 to help define American whiskey in preparation for legislation. They were assiduous in their task, meaning that their report provides a detailed account of how whiskey was made at the time.

Reading it, Leopold discovered that while every bourbon distillery was using a beer/continuous column set up, the majority of the rye producers utilised these copper three chamber stills.

He kept digging and uncovered a paper from Lloyd Cooley the 1930s, detailing the production methods at Hiram-Walker’s Peoria, IN distillery (at the time the biggest in the world) which shows column stills, a bourbon set up, and the three chamber for rye.

Why would a technically advanced distillery – set up to produce maximum volume – persevere with an ‘inefficient’ batch still? The only conclusion was flavour – and flavour is Todd’s business.

Todd’s answer is sitting there inside the distillery, a three chamber copper still made in 2015 by Vendôme. 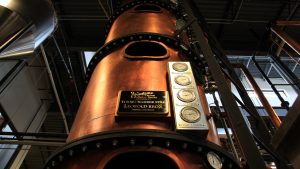 The still is made up of, you guessed, three chambers sitting above each other, with a preheater chamber at the top. Chamber 3 (at the bottom) contains the exhausted stillage from the last batch. This is pumped out.

Once each chamber is charged, live steam is injected into Chamber 3, passing through the wash and rising via a central column to permeate through Chamber 2, where it strips off alcohol and congeners before rising again to Chamber 1.

The alcohol stream then passes though a pipe in the preheater, warming the wash, before being carried through a thumper, and then a condenser, where it is separated into heads, hearts, and tails.

Todd describes it as ‘an oil extraction machine,’ The live steam passing through the wash in Chamber 3 increases in pressure and temperature, hitting 98 – 104˚C (210˚- 220˚F) compared to 92˚C (198˚F) in a column. This pulls out oils and aromas which you won’t normally find in rye The result is bigger in every dimension – thicker textured, and intensely flavoured. Rye like you have never tried before. For a tasting note, click here. 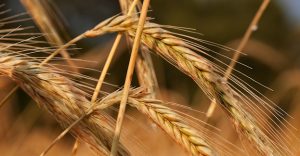 The story doesn’t finish there, however. On one hand he had this flavour-maximising machine. The downside was that the commodity grains used by the industry have had their flavour bred out as the lust for yield has dominated the thinking behind crop breeding.

In 1898, a rye grain used would have contained 60-65% starch. Today it’s 80%. As starch gives alcohol, but doesn’t contribute to flavour, there will have been a commensurate loss of that element over the past century.

The fact that the brothers have built their own commercial floor malting also allowed them access to malted barley, rather than using the enzymes which are commonly used. There’s 20% of their malted barley in the mashbill – and that too adds to the flavour.

The final key is the low barreling strength of 50%abv (100˚proof) to cut down on aggressive wood extraction. Ageing in dunnage warehouse also keeps the evaporation rate low, meaning they whiskey can be bottled, without reduction, at the same strength as it went in to cask.

All of these are elements you hear spoken about by distillers, but rarely do you see them applied in such a holistic way. It’s a demonstration that if you are wanting to change something in whisky, you need to look at the whole process.

What could have been an exercise in whiskey archaeology has instead become a celebration and rediscovery of a true lost style. The past now makes sense and it can influence the future in many ways. This is the most significant whiskey made in America this century.

Matt Hofmann and this team at Seattle’s  Westland distillery have been pioneers of this deep thinking approach and have spent a decade examining that question, ‘what is American whiskey’.

In their case it has been specifically, ‘what is American single malt?  The culmination of this is the release of Westland’s signature American Single Malt Whiskey. It too starts in the field. If you are making a malt whiskey then look first at the grain. This has meant working with with the Bread Lab in Skagit Valley to explore flavourful varieties.

If you have to malt, then why not adopt brewing techniques to create a range of flavours through kilning? That involved a recipe which comprises Washington Select Pale, Munich, ‘Extra Special’, Pale Chocolate, and Brown malts, as well as heavily-peated (the last from Baird’s).

The approach continues through fermentation – finding the right yeast (Belgian Saison ) to provide the flavours wanted –  and then distillation with their own complex system to help maximise and concentrate those flavours.

In terms of maturation, why stop at new wood? Why not also add in refill American oak, first fill ex-bourbon, and oloroso butts and hoggies (both first- and refill)?

Every decision point is examined and questioned. Each element gives flavour. The skill  comes in balancing those layers. Whisky, for all its intensity, is the result of small, subtle balances. The result is remarkable – there’s a tasting note over here. It helps define not just Westland, but an approach to American single malt.

This and the three chamber rye are examples of this joined-up thinking. Know your farmer, your maltster, avoid the commodity cereal market, and look for flavour at every stage of the process. It can be done – and here’s the kicker, it can be done at decent scale.

Whisky is about progress, moving things on, but that impulse has been accompanied by an adherence to efficiency – smaller casks, faster maturation, ever higher yields – all done to maximise volume, but at what cost?

These whiskies and others like them show a different interpretation of the term. What is more efficient – maximising the volume of spirit you can make at the expense of flavour, or taking a hit on yield in order to maximise that flavour? Could there even be a way to maximise yield while retaining flavour?

Those are the questions which all 21st century whisky distillers have to engage with. Some answers lie within these two bottles.