This piece about my introduction to the whisky world appeared in a festschrift for my dear friend Michael Jackson (the writer). As the book is long out of print I thought I’d pop it in here for your delectation. I’ve divided it into two parts and done a tiny amount of cosmetic surgery – just a wee nip and tuck.

Be aware, gentle reader, that there are sweary words and Glaswegian dialect involved… and that the account is of a time long before responsible drinking was invented. 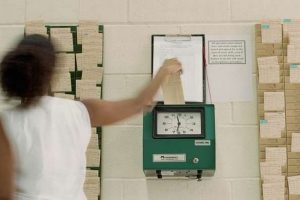 The smell hit you first, the fumey sweetness of whisky-soaked cardboard, a head-thickening, gut-churning blast of alcohol mingling with newly cleaned lino and the stench of early morning evacuations emanating from the row of green-doored cubicles.

“Get a move on. Fuckinstudent!” came a cry as I scanned the panel containing a hundred identical brown cards. I knew that a failure to clock in on time resulted in you being quartered (have a quarter hour’s wages docked), though I had the distinct feeling that my abuser was thinking of the term’s medieval meaning.

A woman off the line asks me my name, grabs the card immediately, shoves it in the machine, pushes me through. “Best learn it quick son,” she says. Smiles and bustles off. So this was work. 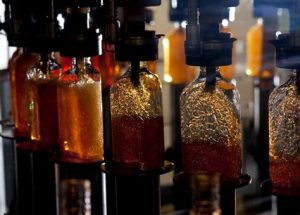 The “fuckinstudents” (as we were doomed to be known) were gathered together in order for the day’s tasks to be doled out by one of the brown coats, a lugubrious balding man with glasses.  “You and you, fibre; you two, despatch; you lot,” he gestures to the rest of us. “You’re on the lines… apart from you son,’ pointing at a nervous looking chap, ‘get yersel’ up to the filters.”

Those of them who were on their second or third year at this move off to the designated area. I stand with another newcomer at the end of a line with the brown coat as he takes us through the basics. “Get a pallet, put the cases on it, then band it. Then start the next. OK?” Training completed, he moves off. How hard could that be? Picking up boxes?

I watch the first case come towards me, the sticky tape pulling the flaps down, the stencil marking the side and then rattling down the rollers. Heavier than I expect, it slips in my grip and drops on to the front edge of the pallet.

“Wrong way.. other way roon!” I turn it and go back for the next one. The line is already backed up. Clear them quickly and slowly begin to build the levels.

“Ye reverse the order each layer!”

He comes over, breaks down the build and shows me. Goes back to his line muttering. I’m sure I hear a muttered “Fuckinstudent.”

The shiny surface slips in the fingers, gliding over the two dogs as I humph the next one up to shoulder height, push it above my head and shove it to the back edge.

He hands me a strip of plastic tape, passes one edge round the cases, pushes it through a machine, tightens the ends, clips it, cuts it. It seems easy. A forklift is waiting to crash into the pallet and carries it off to despatch. Next pallet is grabbed and off it goes again. It’s 8.30am and I’m knackered. 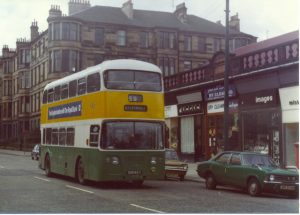 The day would start at 6am in the steely light of a Glasgow summer. Get dressed, mug of tea, walk to the bus stop. Whose idea was it to get a job? A job that started at this time in the morning at that? Fact was, I needed one. Money mainly.

Out of school, unsure of exam results, needing to get out of a house that was still draped in the memories of my father’s recent death. Get over it, get on with it, life goes on and all of that crap.

My mother still cried every day and I had no words left. Somehow his death had changed people’s view of me, altered my status. The older generation: family friends, relatives, neighbours all said how “mature” I had suddenly become. My uncle, a remote though kindly man, had begun to take me to pubs and buy me whisky.

I was just 18, but there were shoes to fill, shoes that were still lined up in the wardrobe under empty suits which I’d never grow into. Maybe unconsciously this investing of notional maturity was the easiest way in which they could cope with me.

Tell him he’s an adult and he’ll have to grieve like one. Which meant being stoically Scottish and getting a job. Nothing like the Protestant work ethic for driving emotion out of the equation.

My uncle, who worked for W.P.Lowrie, the sherry and wine arm of James Buchanan (aka Black & White) told me they were needing temporary labour at the at Stepps bottling plant to help with the ramping up of production that took place before the plant closed for the Fair fortnight. I filled in the form. Got the job. So what if it was on the other side of Glasgow.

Maybe my hollowness suited the early mornings. My fellow passengers too were just shells heading into town to be filled up by whatever mundane task they needed to do in order to live.

I had to change at Buchanan Street bus station from the tricolour-clad Corporation buses to the blue fleet which serviced the outer suburbs. You could always rely on Glasgow’s inability to keep its sectarianism under wraps. Out past Dennistoun, Riddrie, my Dad’s birthplace, the Bar-L to Stepps. Out there on the fringes, not quite Glasgow, not quite the planned paradise of Cumbernauld. 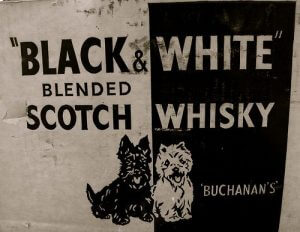 After a couple of weeks I was in the swing of things.  Learned the hierarchy. Fuckinstudents were at the bottom of the pile, then there were shop-floor workers, above them the shop stewards, then the brown coats, the white coats, and finally the suits.

There was clear demarcation between all the groups and you stuck to your own clique. By now, I’d learned the new geometry of each of the builds, even mastered the 96 build I had struggled with of the first day.

The secret was to start at the back corner and build it up in a wedge shape from there, but never completing the base layer until the last moment. There was strange beauty to see it coming together, knowing the right tension on the banding, pulling until the tape began to bite through the outer.

We all prayed for the Black & White lines as they had the easiest builds. If you were lucky you might get the speciality line, slow moving and dedicated to the big sizes and miniatures. Heavy as fuck the boxes were, but the only came down to you once every five minutes or so.

No-one wanted the gin line. For some reason, gin seemed to be easier to bottle than whisky so the pace was frantic; and as the cases were only stacked three high, it was head down and get tore in, standing in a permanent crouch flinging them on to the pallet for 40 minutes.

As you weren’t allowed to leave the shop floor, the only place to sit was the gent’s toilet. Because  it wasn’t an official break there was no chance of a cup of tea, unlike the mugs of the browncoats sitting in their elevated office. 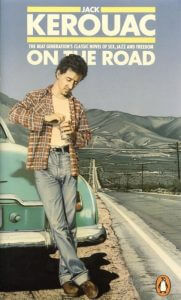 The bog it was then. Two cubicles, a urinal and men, standing, leaning, sitting, smoking, shitting, having a piss, talking horses and football, reading the paper.  A nod from one of them.

“Ye’ll huv a drink.” The words were an order rather than a polite suggestion.. “Aye. Sure.. thanks.” I cast around for what he was talking about. Then a hand went into the cistern and hauled out a bottle, hot off the line. Drams would be passed around. That was breakfast dealt with then.

I wondered whether to pull the Kerouac out of my pocket. Thought better of it. There was time for that on the bus.

The day stopped being about work and became more of a long drinking session interrupted by bouts of activity. Whisky breath was a sign of camaraderie, membership of a gentlemen’s club.

Inevitably, productivity dropped significantly in the afternoons. Cases would be dropped, bands wouldn’t be tightened fully, the forklift drivers, equally hammered, would cowp entire pallets. The floor was awash with drink. So were we.

No-one really seemed to mind as another dripping box was heaved into the waste. If you didn’t love whisky by the end of this you were in the wrong job.

“You. Fibre.” I’m being led upstairs to where the empty cases were kept. Never quite worked out why it was called fibre. Packing would be more accurate. A dim, dusty place occupied solely by men too old for the speedy manual labour of the lines.

A silent cardboard city, skyscrapers of made up boxes, suburbs of flatpacks, blocks of liners, decorated with monochrome labels: the two dogs, ‘House of Commons’, ‘Royal Household’.

I was led through a maze of cardboard to hidden bothies in the middle of which there were boxes used for chairs, a packing case for a table and, in a niche excavated in the brown walls, a secret compartment holding the inevitable bottle and packs of cards. ‘Ye’ll huv a drink.”

You could hear the brown coats coming round, calling out. One of the men would leave by another passage, find out what job had to be done and return. In reality there was little work. I felt older by the second, as if the cardboard was seeping into my veins.

Looking at their kind, tired eyes. Maybe they lived there. I never clocked them at the start of the day. Is this how it ends? Forgotten in a hidden bothy?

I missed the lines. The noise, the chaos, the smell, the sound of a pallet sclaffing on the floor, the rattle and clink of glass.

I enjoyed the routine, the weird artificiality of the day, the anonymity of being just a fuckinstudent, being free of questions. The simplicity of this life suited my state of mind, the fuzziness of drink, the keys to a new world.

It was the summer of ‘77, a time of change and choices, but big life-changing things like Uni or a job, punk or psychedelia could be shelved for a few hours, thanks to the blankness of this routine. Just lift your boxes and stott from the end of the line to the bog.