Shanghai. It takes 30 mins from landing to being in the taxi. Get to the hotel and slot into the routine. Shower, lie down (curtains open), doze, iron shirts. Don’t think about the time difference. We’re not in Brighton any more Toto. Make tea. Make more tea. 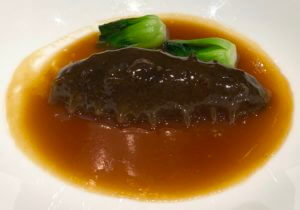 Dine on sea cucumber which looks not dissimilar to the Ohmu in Studio Ghibli’s Nausicaa. The swirly effect of jetlag starts to hit hard. It can be amusing in that mildly fucked-up state as you’re never quite sure what you say is what you mean which can be amusing, and anyway there’s six drams to drink to try and make some sense of for a gathering of a clutch (pool?) of quiet writers.

I talk – via Sam Lu my long-term translator and friend – about time and how, when I started this gig, 18 years was pretty much the upper limit in terms of age and how anything older was widely regarded as being on the verge of being off.

Now eyelids barely flicker when something of advanced age appears (though eyebrows might be raised when the price is revealed). Maybe 30 is the new 18. We’ve become blasé to the passing of time.

An early start to catch the flight to Wuyi Mountain. For a tea lover, this is the equivalent of a single malt geek making their first trip to Islay. And I’m a tea lover. On the plane I pull out a couple of books from the bag. There’s always books with me. On long trips I try to take some which are relevant to where I am going – this time it’s poetry by Han Shan and Hsieh Ling-yün. There’s often a novel as well, grabbed at random and looked at with puzzlement over the next few weeks. Poetry is the best idea for long trips.

Gaze into wind and cloud

And you know this realm utterly

We head to the estate which has been in the Huang family’s hands for 12 generations. Inside, leaves are drying, wilting on racks, being tossed in baskets to break the leaf and start the ferment, then pushed and squeezed by hand, roasted over charcoal. The aromas heady sweet, fresh yet floral, then nutty, fruity. I’m persuaded (I’d hate to say forced) to try the hand pressing stage – it comes with the territory – grab a bunch of leaves, sharp diagonal thrust, squeeze, a pull back to the opposite side, like some martial arts form. I feel the moisture running through my fingers as the aroma hits, green and sappy.

Master Huang Sheng Hui leads the class [there will be more on this at Daily Beast soon] while I chip in with links between tea and whisky in terms of trade, the roots of blending, how it has moved from single estate/single malt to blended tea/whisky and back again, of commonalities and parallels in making, thinking and flavour. 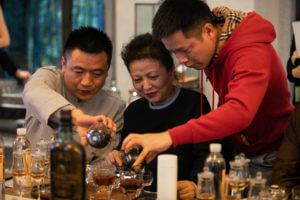 In his introduction to Hsieh Ling-yün, David Hinton writes of how ‘Chinese intellectuals would sip wine as a way of dissolving the separation between the self and the “natural world” or tea as a way of heightening and clarifying awareness of “natural world”.’  A combination of both – made stronger by the use of whisky then opens the world.

We rinse and pour the tea. The aromas familiar: black fruits, plum skin, orchid, moss, wood, tropical fruits. The texture, the grip, the finesse, the layers. Each tea pulls a different element out of the whisky as they melt into each other.

I know that the tea is exceptional, but I don’t know why. I don’t have the language to talk about tea. I can tell there is depth and sophistication, but the complexities are shrouded. You need a guide on the mountain path before you find your own way. It will come with multiple cups, possibly. Nice to be out of the comfort zone.

You can attend to the singularity of things like that

Or you cam weave them all into their place together

It’s their singularity that makes them noble

Together each at ease in its own seasons.

After dinner, in the lobby two bottles steadily disappear as the talk flows. Tea time has passed. Now it’s time for the relaxant, but I still boil the water before I go to bed. One last cup. 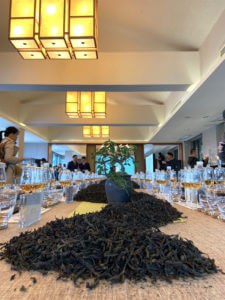 In the morning, the mountain goes from the colour of cigar smoke to dusky green. The first sun hits the pinnacles and domes behind, trees mere brush flicks on the ridges. A longing to go in, not back to the cities.

It’s in my slow crossing over this vast range

That inner and outer come apart…

I look back along this road through toppling peaks

Gaze ahead at the climb through impossible cliffs