We head west, climbing through Tyndrum, Glen Orchy, skirting Rannoch Moor, the twisting plunge into Glencoe, then Corran Ferry. Stand on the slipway, inhaling the mix of ozone, and salt. Over the narrows and back into moorland, turn right at Lochaline and hug the coastline. Peninsulas and firths, sounds and coastlines. Water, rock, and woods.

The road somehow becomes even tighter as drifts of meadowsweet gives way to oak forest. ‘Almost there’ says a sign. The trees clear and in front of us, the rough harl of an old steading. 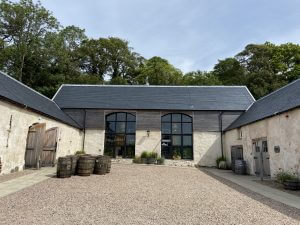 This is Nc’nean. Named after the Gaelic witch queen, it was established by Annabel Thomas on her parents’ estate, the final part of their project to make it self-sufficient and create year-round employment.

‘The other option was holiday cottages, but there’s not much demand in winter time,’ explains Amy Stammers, Nc’nean’s visitor manager. ‘Having a distillery here meant people moving here and staying here.’

Those people include distillery manager Gordon Wood who, after 25 years at Diageo, is loving the hands-on nature of the work here – as well as training up a completely inexperienced team.

‘Do you want to see the boiler?’ he asks.

It’s not a question you’re normally met with on a standard tour, but Nc’nean’s hardly a standard distillery. Nor, come to think of it, is this your average boiler. Made by Kohlbach, and the size of a small house, it burns 2 trailers of woodchip a week.

‘All the wood comes from the estate,’ Gordon explains. ‘To start with we used already felled trees. Now it is part of a replanting scheme. We’re not just growing trees to burn, but planting a diverse range of species to supporting a larger habitat.’

Sustainable is the word which crops up most often on the walk-through. ‘We’re emitting 30.4 tons of CO2 a year,’ says Amy. ‘If we were using fossil fuels it would be 300 tons. Our aim is to be carbon neutral within 10 years.’

‘And 80% of water is recycled,’ Gordon adds. ‘The only water we’re abstracting is for process’.

And so it continues: the exclusive use of organic Scottish barley, two different types of yeast, two spirit types, one fermented with Anchor to produce a spirit earmarked for long-term ageing, the other fermented with a 50:50 mix of Anchor and Fermentis.

There are nods to the past, such as making a botanical spirit instead of gin which then takes you back to usquebaugh (the cask-rested examples are fascinating).There are also nods to the future in the ongoing yeast trials which are already showing promising results. 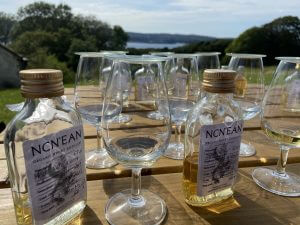 This isn’t an exercise in search of lost time, but seeing how these elements are appropriate for the site, the community, and a new consumer.

Then there’s the recycled glass bottle. ‘This was our attempt to try and close the loop,’ says Amy. ‘No British glass firm could do it, but at the last minute we found a company in Germany who had only just started up doing that very thing. It’s really cool.’

It’s a lot to take in. There’s plenty of other distillers who have said, ‘we’d like to do organic’, or ‘we want to be sustainable’, or ‘we’re thinking about yeast’, but who have  followed that statement up with ‘but…’

At Nc’nean they’ve set out their vision and done it.

Maybe being on the coast, away from noise of the market helps to create a different mindset. The road ends at the distillery. Nowhere else to go. In front is the sea, behind the woods. A place to settle and do your own thing. 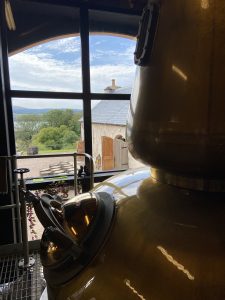 One of the arguments against organic has been cost. Here’s a distillery whose every decision appears to be increasing those fixed costs – barley, transport, equipment.

‘All of the costs have been justified on the basis of environmental protection,’ says Amy. ‘The only real obstacle is the location and the fact we are having to bring in materials on a very small road,’ though she admits the last hasn’t pleased all of the neighbours who have retired here for a quiet time.

It isn’t a matter of whether Nc’nean  can be sustainable. Conceivably, it could only work because it is sustainable.

And now the first release has arrived, a mix of 35% ex-bourbon casks and 65% STR – their use a nod to the guiding hand of the late Dr Jim Swan. Fresh, lightly malty with hints of almond, lemon, caraway and orchard fruits it’s gentle and yet dynamic – and makes a fantastic Highball. 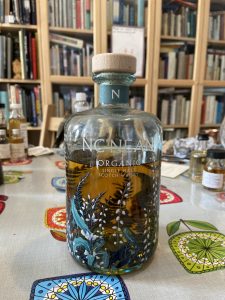 The tasting note is over on the tasting pages, but even writing that out seemed to be missing, or maybe obscuring, the point. People will buy this because it is the first release. Some may flip it. Others will look at scores and ratings and debate their accuracy.

It strikes me that none of that is relevant. What’s more significant is how Nc’nean, like many of the newer distilleries, demonstrates how a distillery can have a positive impact on a community. Its presence, its needs, cause ripples across an area.

Distilling is more than just the physical making of the spirit, but the way in which that making helps families, transport, farming and the local economy. Nc’nean’s is more than a list of figures, tasting comments and scores.

It’s about this steading being repurposed, about a farm, estate and distillery working together and more significantly about a community being re-established.

I sit in the sun looking over to Mull, think of what Gordon was saying about major distillers making trips to see that boiler. Nc’nean’s not on the fringes, but at the heart of the conversation.

Not at the end of the road, but at the start.