This is an account of a trip to China taken before COVID-19 hit.

We’re in Xiamen for three nights which means, well, being able to unpack for the first time. There’s work as well, this time a two hour tasting of the Special Releases Never having tried the drams before adds a certain focus and nerves to the whole shebang. Keeps you on your toes. They’re good drams too [more soon on that] and yes, I know I’m behind on this, there’s no need to remind me.

It’s less worrying about the drams and more about what the focus should be.

And gazing deep; our love of things grows

Thanks Hsieh Ling-yün, but how deep and what trench of the whisky ocean do we dive into?

I’m moving away from the production overload angle to be honest. It’s been overdone. In some ways, it’s too easy, but it’s also not relevant to most people. Start talking 2.81 distillations and watch folks’ eyes glaze over, confidence draining away when it should be being built up. So, background, location, stories, flavour… then build.

Post dinner, the temptation of bed was greater than that of karaoke. Every so often you need a rest. I don’t know how proper brand ambassadors do it.

The next day’s afternoon tasting was cancelled because the same guys were going to be coming to dinner and it was pointless repeating the session. We look at each other, slightly baffled at the thought of essentially a free afternoon. ‘OK then, “says Anthony, ‘lunch.’ I’ve come to realise it’s his solution to most things. I’m with him all the way.

Trees with white socks, parks, balconies hung with washing, the occasional thrust of impossible to shift rock-covered vegetation reminding you of [….], one-room stores, and a restaurant where the ocean appears to have been displaced into bubbling tanks. Fishes’ half smiles, bumping glass, a dragon’s palace or a prison. We crack, pick, slurp, take tiny glasses of beer. Spin the dishes slowly: crab, oyster rice, fish, greens, clams, prawn sashimi. More jellied worms appear. Only Anthony eats them. 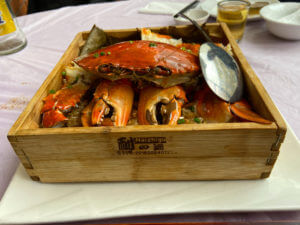 We head to the boutique to sign bottles and end up doing an impromptu tasting, talking age, casks, dilution and ways of drinking, ‘I need to get a buzz’, ‘is it OK to add soda? My girlfriend wants to know.’

We’re good at being relaxed and saying, ‘whisky? Hey, drink it any way you want’, but not going that extra step and saying, ‘… like this way,’ or ‘maybe don’t knock everything back in one.’ The same bunch turn up at the dinner which helps raise the volume and consumption level. Good fun was had by all.

There’s filming first thing next day, which means whisky for breakfast. The evening is the opening of the Johnnie Walker Blue Label bothy. Let me point out, it’s not a bothy in the Scottish sense – a bare hut with a fireplace and an evening spent sitting drinking whisky (which in my experience is never Blue Label) and cold baked beans by candlelight.. ‘Hah!’ says Anthony, ‘This is China, we upscale everything!’ It’s a lavish multi-room educational space complete with a sit-down dinner of Michelin star food with appropriately high end drams. No beans in sight.

I wonder who goes to these things? I’m not in that world of influencers. Maybe at this stage in a new market you try everything and hope something sticks, because you have to be seen to be doing something – and in a place where it’s not been done before.

As it transpires, the meal is just a snack. The rest of the crew had been at dinner in a restaurant by the docks for four hours by the time I arrived, but the rule here is new people = new food so, ‘more crab! more Tsingtao Original! (which is good hazy unfiltered beer). I resisted, but as there’s about 20 dishes on the Lazy Susan it’s inevitable that you start to pick, then pick again, then eat and drink and … off we go again.

Then Vicky turns up with a bottle of King George V.  That necessitates more food. The chef who, coat on, was sneaking out the back door, is called back. ‘More crab!’