In December last year, the team behind the remarkable Fife Arms in Braemar asked me to consult on a new whisky bar for the hotel. Exciting? Yes. Daunting? You bet. I never saw myself as being on the other side of the bar again. I’ve done my stint behind counters and it never ends well.

There was also an awareness that it’s easy to think up bright ideas while cradling a glass, foot up on the rail, which in reality are impossible when you are faced with the practicalities.

Being allowed inside the discussions about how to create this bar was fascinating and I remain in awe of the teams involved. A bar isn’t just the bottles, but the seemingly mundane realities such as storage, glasses, and tills, as well as the design, colour scheme, seating, lighting, and ambience.

All of this creates a mood which frames the drinks but, most importantly, puts the guest at their ease. It’s called hospitality and it is there within every element, no matter how seemingly humble.

This isn’t confined to whisky bars in 5-star hotels – it’s there is the Pot Still, or Bow Bar; it is there in The Gate, Fiddlers, Nauticus, Highlander, Swift, Milroys. (I could – and maybe should – go on). ‘Welcome’, they say, ‘relax, and we will look after you’.

The space – the small former library – was a challenge and an opportunity. It not only reduced the amount of seating, but prevented the room being stuffed with every whisky in the world.

Better then to accept the limitations of the room and have a smaller range (OK, 365 whiskies) which could be regularly refreshed, allowing the bar to stay on top of new releases. The whisky world is continually evolving, but shelves are not infinitely extendable. 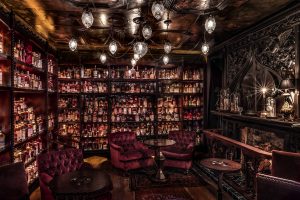 The task was to create a core range, have a balance between prices, distillery bottlings and independents, include a hefty chunk of grain, blends and non-Scotch. There was a lot of tasting.

What to choose? By quality, flavour, interest, balance. How to display? By flavour. It’s worked for Black Rock, it worked with the Single Malt Flavour Map, so why not here?

It is daunting to be confronted by a wall of whisky. Some find it thrilling, most of us I reckon, find it a tad scary. Where to go, how to navigate?

As a newcomer to whisky you either turn tail, or feel uncomfortable in this alien space where you don’t know the language. You are worried about making a fool of yourself.

If the language around whisky speaks of it being contemplative, conversational, communal, then the atmosphere of the bar cannot be oppressive. It must charm, encourage, invite, and encourage exploration – if that is what the guest wants.

Flavour is how all of us navigate the whisky world, it is the waypoint, it’s the magnetic field as we migrate from one point to another. We buy a first dram on recommendation, we buy it a second time because we like the flavour. Then, if the bartender is good, that comfort zone is established, and you can begin to explore the immediate landscape, then venture further afield. It all tied in to the need for the guest to feel relaxed and welcome. 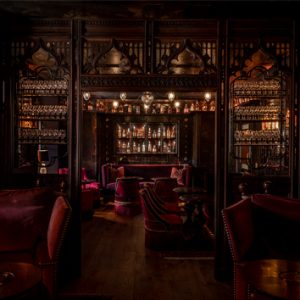 Once again, the space helped. The designers, Russell Sage, dispensed with a physical bar. All the service would be by trolley, giving a more personal engagement with the guest, the need to engage in conversation, the chance to recommend and guide.

The trade seemed to agree. As soon as the words ‘arranged by flavour’ were uttered the response was immediate, and positive.

It’s been a huge learning process, but the tasting is over, the whiskies chosen, arranged, the list written. I think it looks pretty amazing, but ultimately it comes down not to number of the bottles, but to the bar team. My bit was easy. They are the experts. If you’re in Braemar, pop in.

My thanks to the team, suppliers, and the many friends in the whisky trade who got the idea from the word go and were unstinting in their support.