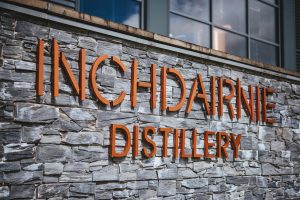 There is a sign by the gates at Inchdairnie explaining that no visitors are allowed because ‘we’re busy making whisky’. It’s polite, but to the point. This Fife distillery, close to Glenrothes hasn’t been set up like most other new ventures, hungry for people, in need of revenue.

‘A visitor centre would divert resources and thinking for a doubtful return on the investment,’ says managing director Ian Palmer. ‘We are a business first and last and our business is making whisky. We’re not in the tourist industry. Bigger companies can have dedicated team. We can’t. Anyway, a coffee machine costs the same as two Amontillado casks.’ He looks at me. Palmer possesses the driest sense of humour in Scotland (no mean achievement), but he’s serious.

This focus makes Inchdairnie, for me, one of the most exciting distilleries in Scotland, a place set up to challenge what whisky could become, freed from conventional thinking. ‘Never follow dogma,’ he saids to me once. Unless it’s your own.’

An ever-growing stream of spirit is being made, all named after nearby farms. The spirit for its own releases is made in four styles at different times of the years, using different yeasts and distillation techniques in order to encapsulate the aromas and characters of each season.

Then there’s a range of single malt, made in a different style, for trading [Strathenry], KinGlassie [peated malt], and since 2017, RyeLaw a mixed mashbill of malted rye and barley which has also become a permanent member of the core range. While there are no plans for the inaugural Inchdairnie singe malt, (‘it’ll happen when it’s ready,’ according to Palmer), the first Ryelaw could hit the market next year.

The final member of the family, PrinLaws, is the distillery’s annual experimental spirit. The first, in 2019, was made from oats, but last year’s was postponed because of Covid. Undeterred, this year two have been made.

The first is a sour mash, the technique used in bourbon and rum and, as something which, as far as I know, has never been tried in Scotland, where the acidic residue of the distillation (‘stillage’ in America, ‘dunder’ in rum, ’pot ale’ in Scotland) is put back into the fermenter. This gives consistency, adjusts the pH of the ferment, as well as helping prevent bacterial infection.

Yeast prefers a neutral, or acidic (low pH) environment in which to work, but Kentucky’s limestone water is alkaline (high pH). Adding sourmash increases the acidity, helping the yeast, as well as helping to produce fruity esters.

This wasn’t an attempt to make a Scottish bourbon, but using an old technique (the use of dunder in rum dates back to the late 16th century) to create a new flavour of spirit.

The technique used was different to that in a bourbon distillery, with 10% of fresh pot ale, ‘after a lot of cooling’, says Palmer, being added into the wort in the mash conversion vessel, rather than the washback.

‘We can do this because we have no need to adjust the pH in the washback to reduce that potential of infection,’ Palmer explains. ‘We are doing it to see what flavours we can create.’

Fermentation also necessitated more fresh thinking. ‘Since the addition of pot ale drops the pH, it meant that we needed a different yeast which was more acid tolerant, as well as being able to cope with the higher amounts of amino acids in the pot ale. These would cause a standard distiller’s yeast to burn out before the secondary conversion has fully taken place,’ he explains.

‘We explored this with analytical consultants Tatlock & Thomson and our yeast supplier and decided to use a blend of MG+ and Y23 yeast strains.’

The ferment took 60 hours in total though the peak temperature was reached earlier than normal and there was a loss of yield and a slightly lower alcohol content in the wash.

This was then double pot still distilled. ‘The spirit did have more flowery notes, but at the expense of some of the background flavours when assessed against the Strathenry. Not sure if they were not there or the other flavours dominated more. It was definitely different, but there was still a distillery DNA running through it.’

I found it to have good weight with some floral/currant leaf aromas and good complexity that hinted at red fruit. The palate showed good bright energy, and some juicy mouthfilling qualities. There is complexity at the heart. Palmer seemed more cautious.

‘I expected the spirit to keep some of its background complexity, but we appeared to have lost it a little. This is what the Prinslaws is all about, we really do not know what will happen. Assumptions are dangerous. We may do it again, but this time add in more pot ale.’

The second of this year’s PrinLaws was a wheat spirit, made from a mixed mashbill of 52% malted wheat and 48% malted barley. Again, while wheat is widely used for grain whisky, this is the first malted wheat mashbill I’ve come across in Scotland. The wheat was Fife-grown and malted at Muntons’ drums maltings in Stowmarket.

Again, the mash filter proved its worth. ‘Wheat is similar to rye in terms of stickiness,’ says Palmer, ‘but despite this, the mash went through the filter at the same rate as 100% malted barley. I think the fact that the wheat was malted helped.’ Here, the yeast blend was changed to M and MG+ from AB Biotek.

The first distillation took place in the wash still, the second in Inchdairnie’s Lomond Hills still. This is an adaptation of the old Lomond still design, and is named after the range of hills behind the distillery.

While the original had moveable plates in the neck which could vary reflux, those in the Lomond Hills still are fixed. Reflux is manipulated by flooding the plates with condensed distillate. The more that is reintroduced, the lighter the spirit will be. Here the reflux was increased maintaining the strength in the spirit cut at 72%.

I found it initially very sweet on the nose with a slightly funky green/vegetal note in the back, while on the palate an initially soft, almost creamy, feel started to dry towards the back bringing out more wheat chaff-like dustiness. This increase in cereal character, Palmer felt, was down to the malting process. Both have gone into ex-Bourbon casks, but the potential for fascinating mature whisky is there.

The experimentation continues. In 2017, Palmer initiated a programme to build up seed of two landrace barleys, Scotch Annat and Goldthorpe, as well as heritage varieties Bevans-Archer and Golden Pheasant, with plans to distil in 2023. It clearly will never stop, it’s just not in Palmer’s nature. Any question will be dissected, opined over, spreadsheets and reference papers brought out. ’Just give me the detail. It’s where I like to swim,’ he says.

We hear a lot of talk about ‘innovation’ in Scotch whisky, but it is is often no more than using a different cask for secondary maturation, something which might have been innovative in the 1990s but is now just an accepted practise. However interesting a mezcal-finished malt is, it ain’t innovative.

True innovation is about examining all aspects of whisky and seeing how the tradition can be extended, tested, and challenged. That means looking at those points of flex within the regulations – cereal types, mixed mashbills, yeast types, distillation, different oaks and coopering techniques.

It means looking at the distillery as a creative space which can be utilised in numerous ways, a fusion of technology and science with the world of creativity. Innovative distillers look at what they have and then ask how they can maximise its potential. ‘We are pushing the boundaries of flavour,’ said Palmer. ‘In whisky, the biggest risk is not to take a risk.’