There’s this story, probably apocryphal, of a man who is sent to a psychiatrist because he is suffering from depression. After a series of consultations, the psychiatrist says to him, ‘I cannot find anything the matter with you. I don’t think you are depressed, you’re just Scottish.’

It’s one of those tales that people tell against us as it’s confirmation of the gloomy Caledonian mindset. More frequently though, we tell against ourselves because we believe that we aren’t like this at all.

There was this moment after we’d arrived in Auckland. We’d never meant to be in the city, but as our original flight home via Australia was cancelled we’d had to buy another ticket back to the UK, from Auckland via Hong Kong. It was due to leave the next day. Then the news comes on. Hong Kong has closed its borders.

We’d been joking that we’d be stuck in New Zealand. Now we were. Panicking calls and texts, planning our next move. We can’t stay in this grimy tower block with no shops nearby and strung out folk in the street

Airlines aren’t picking up, the Embassy has gone AWOL, New Zealand is entering Level 4 lockdown the day after. We decide to head back to Christchurch – where there’s an international airport and a network of friends, but how, where?

The calls and chat continues through the night. It’s hard to sleep anyway. In the morning, I stand on the balcony. I’ve not only ruined what was meant to be a holiday, but put my family at risk. We should be at home, not here.

I look down. 12 floors ought to do it. They’d get home. Compassionate grounds. It would be better for them in the long term. It lasted a minute, maybe less Hand on the rail. Then the phone went. A friend of a friend offering a house in Christchurch. I go back inside.

Would I have done it? No. At least, I don’t think so. After a few more days of being in that building who can tell? 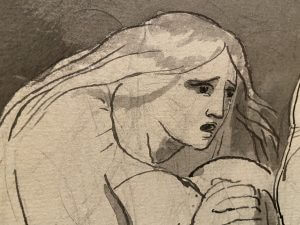 Like the rest of you, I’ve spent the past few weeks Zooming, speaking on the phone, writing emails. ‘How are you?’ every conversation starts, ‘hope you are safe and well.’ The answer is always the same, ‘I’m fine. Can’t complain.’.

I’ve started to try and read between lines, listen to the tone of voice. I’ve begin to notice how when people are about to say, ’actually, I’m not great’, they stop, then divert the conversation, ‘…but there’s folks worse off than me.’ That may be true, yet it doesn’t mean there aren’t days when you are depressed.

I hear it in the voices of friends who are losing their bars, guilty that they are unable to provide for their work family, fellow writers with no work on the horizon, musician friends with no gigs and ‘fans’ asking them to do concerts for free.

Everyone is grieving, and the nature of grief is its predictable unpredictability. When you lose someone close, the flick of someone’s hair, a perfume, a phrase is enough to set you off. It lurks, and you never know when, and how, it will emerge.

That’s our lives at the moment, but we shake ourselves, say, ‘I’m OK,’ crack a weak joke, deflect the questioning, then go and look at more photos of sourdough, but there are days when even the smell of freshly baked bread won’t take the worry away. Yet still we log on to yet another Zoom event brimming with the enforced jollity of an office party.

Sometimes you just want to say, ‘Not today. I’m feeling shit, I’m terrified’, but of course we don’t. We should, but we cope, we endure the suffering, thole it as my Mum would have said. Bury it deep.

Enough. Please start listening to each other. Try to pick up on the signs. Be honest. On your good days, use those Zoom meetings to ask the question. Help lift each others’ hands off the rail.