I sat in on a Zoom discussion the other week, the first of the World Whisky Talks. Towards the end, I was asked a question about the potential impact of corona on smaller independent distilleries.

‘I’m worried’, was the response. Smaller distilleries which are already financially stretched will be further exposed and will either need baling out, or be targets for takeover.

I was concerned about how smaller new brands could break through in the on-trade given its parlous state; the fact that they will be hit proportionately harder than established brands in a recession which could tip into a depression – and that, as Miika Lipiäinen from Kyrö had pointed out an hour before, we are on the verge of a whisky lake.

No-one agreed with this, which made me feel even more like Private Fraser crying, ‘doomed! We’re all doomed!’ 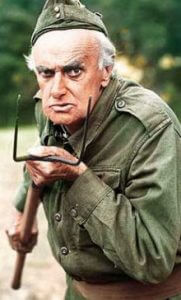 A friend then sent me a piece by ‘Schumpeter’ in The Economist (23rd May). The point being made was that in recent times growth in the drinks sector had come via premiumisation and innovation. Despite the virus-induced uptick in take home sales however, Schumpter concluded that ‘the golden age for booze is probably over.’

Let’s unpick this. To Miika’s point, there’s going to be a lot of whisky sloshing around in a year or so. Distilleries have been opening at a rate never before witnessed and most will have mature (if young) stock on the market within the next five years.

There have been no signs that whisky is growing at a rate which can support all the liquid which is being made – or planned to be made.

Some – those with a business plan, distribution, and investors who are willing to finance and refinance, will get through. Others sadly, will struggle and look for outside investment. As the old sages say, whisky is a long-term business. Sadly, time is a precious commodity these days.

We are also looking at a potentially major recalibration of social drinking. The outlook for the on-trade is worrying. Can pubs and bars, already working on knife-edge margins, stay in business if capacity is halved? Will people even want to go back to the old routine?

We’re all, rightly, leery about spending a lot of money on something which we may not like. We can however make the decision by trying a dram in the pub, the bar, or at a whisky festival.

The on-trade is the test bed, the launch site, the place where firms can assess trends and on very rare occasions (rarer than they’d admit) create them.

All distillers rely on this, but it is of more importance to the smaller player, giving them an equal chance to get glasses into people’s hands, stories into their heads.

Home consumption may continue to rise, but it cannot replace the role of the bar, pub, or festival. We are either already in or entering a recession. Since consumers will be cannier with their cash, once again smaller brands are exposed.

They can’t play the supermarkets’ games, and if the on-trade’s role is diminished, they will rely more heavily on specialists.

The leading on-line retailers are reporting healthy sales, but not of the quirky and unusual. The top sellers in lockdown have been ‘standard’ blends (and Buckfast).

Pessimistic? I’d prefer realistic, but there again I would say that, wouldn’t I?

Rather than thinking ‘we’re all doomed’, maybe this is an opportunity to look at things in a new way: the relationship between specialist and distiller, that between distiller and consumer.

We’re starting to see it. Zoom tastings offer the smaller player a chance to reach people, and save money on expensive international trips. People will, however, soon become jaded unless the offering continues to evolve and become more involved.

No-one knows what will happen after this wave, but what has been shown in the past is that growth comes with innovation. The golden age might be over, but maybe that glitter was only cheap gilding. Now is the time to start to work towards a new future.

See? Not Private Fraser at all.