Cafe Royal eh? I cant recall the last time I was here. Some wine event probably. Its lobby now appears to be a haven for selfie-taking tourists holding their phones at strange angles in order to capture not some moment of spontaneity but a contrived image where their pout and cheekbones are just so. Location, friends are forgotten. They exist outside the moment, in their own curated space.

Upstairs in a gilded palace (if not of sin, then of undoubted decadence) I’m offered a Dalmore Old Fashioned which works on a number of levels: the nature of the event – the launch of the distillery’s 51 year old expression, the decor, and the fact that in the 1930s, this place was home to a bar which boasted a cocktail list containing 33 Scotch-based drinks, something forgotten by those who believe that the adulteration of whisky with sweeteners, modifiers and other spirits is some outré modern concept.

There’s a gathering of writers, clients and fixers – plus Gerry Tosh a man with whom I have shared many a beer and beach domino sessions. He’s now in head shmoozer (aka rare whisky director) for Whyte & Mackay, with an address book bulging with the details of mysterious private clients). 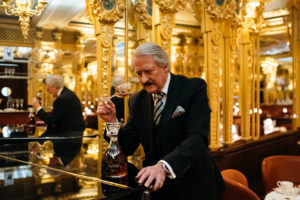 The tasting is, naturally, led by the irrepressible, and you could argue indestructible, Richard Paterson who, as ever makes everyone look scruffy and bombards us all with arcane facts and dates (which no-one ever checks). Did you know that the ’N’ which appears throughout the building stands for Napoleon rather than its original owner, French emigré Daniel Nicholas?

It all culminates in the whisky, part of the ongoing celebrations of Dalmore’s 180th anniversary. Most of its 51 years have been spent in ex-bourbon, then there was four years in a 1938 colheita (vintage tawny port) cask before being transferred to one of Richard’s regular weapons, Matusalem sherry.

You know Dalmore. It’s big, blackcurranty thick and sweetly satisfying, but this, starts lighter than you’d expect given the age, scented rather than woody, in the world of dried tropical fruits and sandalwood. It’s only after time in the glass that heavier elements come out: cacao, currants, barberry, and a sweet leathery note than brings to mind venerable Cognac. Things swing back to Scotland with the emergence of Dundee marmalade, and the sour cherry note remniscent of Benylin, some sherry vinegar/balsamic, and crème de mȗres.

The palate is highly intense, slightly savoury but with only light tannins and this mix of the black fruits, sherry, pepper, star anise, then melting dark chocolate. In other words, nae bad (*). 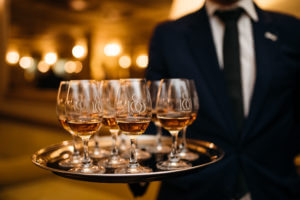 We don’t discuss the price. Bad form old chap. Or to be precise we don’t discuss it out loud. We’re all thinking about it though. 51 decanters at £55,000 (each).

The representatives of the Asian private clients thinking of who will buy one, the writers for luxury magazines formulating their copy, the rest of us knowing that this glass will be the only time we’ll ever try it.

It is what it is. It’s a statement, a halo. It has gone beyond value or worth into a more abstract world. Something for the acquisitive rather than the inquisitive. Will the bottles be opened and drink, or kept on shelf in a vault for some future time when they can be cashed in?

Richard sits down and we return to our conversations and eke out the last couple of sips. As this happens, the thoughts of price disappear. You simply enjoy the liquid. And maybe that’s one of the lessons – that whisky is about those moments when you are with friends, sharing drams and thoughts. It doesn’t need to be in surroundings such as this, all that matters is the company and the way that the liquid helps to shift conversation and that could be a dram for £30 a bottle or £30,000. Being in the moment. That thought keeps me warm as I head past the pouting selfie takers into the cold and the train ride home.

(* This is the highest praise a Glaswegian can give, by the way)