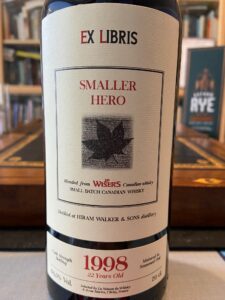 It had me from the moment it came out of the box. The tall black glass bottle, with a serious looking, textured paper label bearing the enigmatic title ‘Ex Libris’ ‘Smaller Hero’. What’s more, it came from Wiser’s (via La Maison du Whisky). Who said packaging isn’t important?

Why hasn’t Canadian whisky penetrated our consciousness on this side of the ocean? Availability must be at top of the list of reasons. This giant of whisky production is still heavily beholden to the US market.

Despite a growing craft scene (if such a term still applies) and attempts by some of the larger players to create a premium sector, the cold dead hand of commodity still lies heavy on Canadian whisky’s shoulder. It’s almost as if its sales departments can’t quite reconcile themselves to the fact that it can also play at the top end.

A reddish amber colour suggests a fairly intense relationship with the cask. The aroma unfolds with luscious, honeyed notes, some ripe red apple, peaches drowning in their own syrup, then some subtle forest floor notes, vetiver, and sandalwood. Rich, yet soft, and while there’s wood in evidence it’s not at all oak-led. In time, some spices emerge, mace most prominently, along with a whiff of rancio, with a background element of bergamot and myrrh.

We’re not dealing with a small brand here. Wiser’s, the ever-reliable Davin deKergommeaux tells me, accounts for 21% of all Canadian whisky sold. It’s made at the Hiram Walker plant in Walkerville, Ontario, across the river from Detroit. It’s the largest distillery in North America – producing 70% of all Canadian whisky. 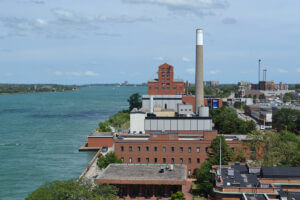 It was there where I first met the firm’s master blender Dr. Don Livermore, wood scientist, educator, proselytiser, creator of the Canadian whisky flavour wheel, and the right man in the right place for Canadian whisky’s new mission.

Like the major Canadian brands, Wiser’s is a single distillery blend – made from a high-strength base whisky, plus flavouring whiskies made from a selection of grains. Rye and malted rye are the most significant, in Wiser’s case, but the distillery also makes corn, barley, malted barley, and wheat whiskies. These are distilled in a range of stills: multiple columns, single beer column, and pot still. All are aged separately and then blended.

For Wiser’s, Don can also draw from a yeast library dating back to 1935, as well as an archive of the firm’s old recipes. Then there’s his in-depth research into oak and maturation, allowing work at scale, but also make small batches – such as this blend, the latest in a series which have slowly been changing people’s opinions about this thing called Canadian whisky.

A caramelised, butterscotch quality to start with a slight prickle, but the texture is remarkable: clinging, chewy. There’s some balancing cinnamon toastiness, and dried citrus peels before the oak grips slightly and a dry cacao develops. It’s heady and mouthfilling.

J.P. Wiser, distiller and cattle man, was born in 1825 in Utica, New York, but moved to Canada to run the Payne distillery in Prescott, Ont. in 1857. He appears to have been a natural – creating a style which found a new range of harmonies between the spicy sourness of rye and gentle corn. By the time he died in 1911, Wiser’s was a considerable player with a reputation for quality; the latter J.P. said, being something ‘which you just can’t rush. Horses should hurry, but whisky must take its time.’

Despite its success, in 1932, J.P’s sons sold the distillery to Corby, and production moved to Corbyville. When Hiram Walker subsequently bought Corby(in 1991), production shifted once more, to Walkerville (there is a slight megalomaniac element at work here which strikes me as very non-Canadian, but anyway…).

It’s a story typical of Canadian whisky – continual consolidation, some brands disappearing,  others changing hands, some surviving. Fewer, but larger, distilleries provided the volume required to slake the thirst of a thirsty US market (Canadian whisky outsold Bourbon in the US until the 1990s).

Yet, it is smaller scale releases which build reputation these days, and pique the interest of a new consumer. That is why whiskies like this are important. They show the quality which exists in Canada’s warehouses. 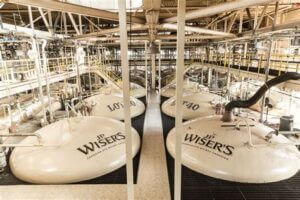 Water has been added

The aromas have been pushed further into the forest. There’s some old pine needles, and while the sandalwood is still there it’s accompanied by sticky toffee pudding/honeycomb chocolate, while the texture remains clinging, and elegant. An interplay between the sweet and the savoury: honey, char, rose. The intensity is lower, but there’s extra richness.

Wiser’s survived the consolidation. It remained a soft, gentle whisky. Then came Small Batch which upped the intensity of all the elements – sweetness, spice, oak. It was followed by Wiser’s Legacy where a third of the blend consisted of pot still rye, adding a new intensity of spiciness. Both recipes came from the Wiser’s archive. This is what old Wiser’s was like. Still balanced, but more forceful.

Others followed. Red Letter, 18 year old, and the remarkable 25, and 35 year olds which were part of the Northern Border Collection. Now this…

calms the impact. Now there’s riper, black fruits. The oak parts, and a creaminess comes through along with some fennel and green apple on the end. Personally, I’d sip it neat slowly with iced water  on the side.

‘The name, Smaller Hero’ comes from an early Mordecai Richter novel, ‘Son Of A Smaller Hero’ which is about a search for identity. When you think of it, that’s a pretty apposite way to describe Dr Don’s and his fellow distillers’ continuing quest.

There’s only 1428 bottles available – grab one while you can.