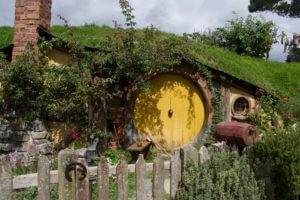 In the days when the New Zealand lockdown was just a rumour, we went to Hobbiton. As I entered the village, the strangest thing happened. In some odd way, the moment I entered it felt like being home, a dream life manifesting itself. Everything from my teenage years of reading the books, then watching the films as an adult came rushing in. My eyes prick with a sudden dustiness.

For a couple of hours my mind kept flipping between two contradictory positions. Yes, I knew it was a film set, we were told of the tricks of perspective, the fact that there are no rooms behind the doors, that the tree on top of Bag End is fake, but simultaneously you believe it is real because it is.

The vegetables in the garden are real, the butterflies land on actual flowers, the washing is dripping on the lines, the seesaw works, the pub has its own beer. We need this suspension, if only to put the calamities of the world at bay, for a while.

I end up leaning on the bar of the Green Dragon with a pottery mug of the (rather fine) stout, yarning with the barman about engineering. I was wondering how they worked out the internal architecture of the hobbit holes – where the chimneys had to go, how a family of 13 could fit inside. 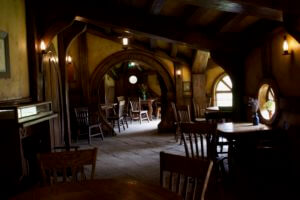 It was a question which accepted that this is artificial, acknowledged Peter Jackson’s maniacal attention to detail. Yet the act of wanting to know how all of it was constructed, helped to make the fantasy even more real.

The bartender is from Coventry, and so frames his answer in the context of a Morris Minor’s engine block and how it was simply upscaled with each subsequent larger model.

‘Measure one hobbit and then extrapolate from that.’ He pauses. ‘It was all factories then.’

‘What are you two talking about?’ asks our tour guide.

‘The decline of the British industrial base,’ I reply. She looks at me oddly. I can see her point. It’s not the standard conversation in a place where all the chat is about hobbits. I’m about to add that where we’re both from was once just like Saruman’s vision for the Shire, but think better of it.

It nagged away though and a whisky connection began to, surprisingly, emerge. I grew up at the tail end of Scotland’s industrial era, in a landscape of factories, steelworks, shipyards, and mines. Blended whisky was a part of that. The workers’ drink, a liquid display of Scottish expertise. Blends grew by being carried around the world, along with heavy engineering and manufacturing.

Now Dixon’s Blazes blast furnaces have been extinguished, Ravenscraig steel works is flattened, the docks gentrified, slipways silent, old pubs shuttered. With their passing, so too blends’ stock has dwindled.

As post-industrial Scotland reinvents itself as a tourist destination, so our whisky focus has shifted to single malt, which carries with it the same idea that thrills us about The Shire.

Could part of the growth of single malt be down to this desire to return to something which is believed to be (by we city dwellers) to be untouched, and somehow more true?

In reality, it’s not as simple as that. Life is hard in remote areas – harder in many ways. Blends aren’t just urban – the best-selling whiskies on Islay were always Old Mull or Black Bottle, not single malt – but we are not talking reality here. We willingly suspend that because the craving for the sureties of  whisky’s equivalent of The Shire is stronger.

Maybe single malt is a drink of nostalgia, and of our existential loneliness. Or, to be less bleak, we drink it to come home. It gives the sort of reassurance which we all need in these times. 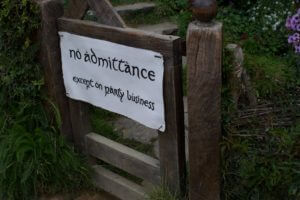